From the very beginning, the Weems development was destined to be something completely different, something better than the norm. It has been a 7-year creative process in the making, the sole purpose of which has been to create an intelligent community paired with cutting-edge sustainable systems, superior building materials, vast open spaces, and a modern farmhouse / timber frame design aesthetic that compliments and retains the rural appeal of Lafayette.

Following are the key components of the development, and what we hope will become a national landmark in quality building, conscientious planning and sustainable neighborhood design:

Why did the comprehensive plan get changed for the Weems property? 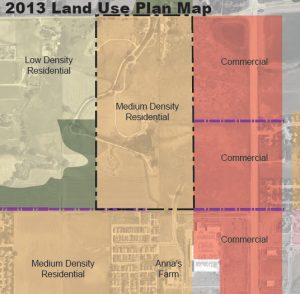 In 2013, the Tebo property at 287 and Arapahoe was updated from open space to commercial, to match land use designations south of the Tebo property. The Weems property was updated from low density residential and open space to medium density, to match land use designations immediately south of the Weems property.

Towns are required by state law to update their comprehensive plans every six years, in order to plan for the future and to coordi-nate planning with the surrounding region. The comprehensive plan is not fixed. It is always changing, every few years, to address emerging challenges and community needs. It is a document voted on and approved by city council. It points the direction for future changes in land use and transportation, and the growth of the town. The comprehensive plan is not final zoning. It points the direction for future development and future changes in zoning.

For more information on the democratic process behind the 2013 Comprehensive Plan update, visit: http://www.cityoflafayette.com/345/Comprehensive-Plan

Why was Boulder County Open Space lifted from the Weems and Tebo properties?

Up until the 1980s there was no Boulder County Open space on the Weems property, or on the Tebo property at 287 and Arapahoe. Open Space was imposed on the northern 40 acres of Susan Weems’ property around 1980 without her consent or knowledge.

Around 2010, Boulder County Commissioners considered where it was important to maintain Boulder County Open Space that would separate municipalities from growing together.  In order to retain open space designations, individual inter-governmental agree-ments (IGAs) must be signed by Boulder County and the two affected nearby towns.  (Many Boulder County IGAs were up for renewal or expiration in 2014.)  Open space along 287, separating Erie from Longmont was expressed as a priority.  The vicinity of Arapahoe Road and 287 was considered a major future public tran-sit crossroads.  As such, it was considered an appropriate location for future growth that is mixed-use and public transit oriented.

In 2013, the town of Erie let it be known that they would not renew the intergovernmental agreement between Erie, Lafayette, and Boulder County, that called for open space on the northern 40 acres of Susan Weems’ property, and the Tebo property.  This portion of open space therefore expired in December of 2014, twenty five years after it was put in place.

What determines Density? How is Density measured?

The density of the Weems Neighborhood is established by the 2013 Lafayette Comprehensive Plan at 6 dwelling units per gross acre.  This is the same designation as the nearby Anna’s Farm, Domenico Property, and Indian Peaks.

How is Density measured?

Gross Density refers to the entire 80 acres. No matter how the land is subdivided into parks, pastures, streets, buildable lots, there is a maximum of 480 dwelling units (6 units x 80 acres) over the entire property.

How much dedicated Open Space is required by the City?

The city requires that 12% of the land (9.6 acres) to be dedicated as city parks or open space.  As part of this open space, they require a 15’ wide strip of land along the south and west property lines for regional trail connections.

Other than this, the entire remaining property, 70.4 acres, may be built up with 480 dwelling units right up to the property lines and within 15’ of neighbors to the South and West.

However, in order to preserve Lafayette’s rural character, the amount of land for parks and open undeveloped areas has been more than tripled – from the required 9.6 acres to more than 35 acres.

Why would we include more open areas and parks? But what about Net Density? 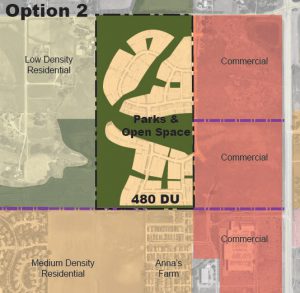 The proposed plan includes increasing the open areas and parks while still permitting 480 dwelling units. This plan calls for a mixture of housing types and sizes with private yards and common greens.

Why would we include more open areas and parks?

The owner and developer would like to have much more parks and open space than 9.6 acres. They desire continuous connected open space wrapping around the property along the West for a number of reasons: in order to preserve rural character, to provide a landscape buffer against low density residential neighbors, and make the land’s beauty and views accessible to all via trails.

To that end, they are increasing the amount of land for parks and open undeveloped areas from 9.6 acres to more than 35 acres. The 480 dwelling units will be built on the remaining 45 acres, and set further away from adjacent neighbors to the West and South. The gross maximum density remains 6 dwelling .

But what about Net Density?

Net density refers to the number of dwelling units divided by acre-age of private buildable parcels only. The net density of single family, duplex, and townhouse areas will be equal to or less dense than Anna’s Farm to the south. Multi-family areas are placed to the northeast adjacent to commercial properties. The net density in those areas will be higher, supporting a walkable village center, while opening up the additional land for parks, open space, and horse pasture.

Zoning - What is a PUD? Why is the developer asking for commercial zoning as part of their PUD?

What is a PUD?

PUD stands for “Planned Unit Development.” It allows a developer, in collaboration with a city, to creatively design a neighborhood that meets the city’s comprehensive plan goals. PUDs are an important tool. A city’s comprehensive plan often calls for a type of develop-ment that is not yet permitted by the city’s current zoning code. This is the case on the Weems Property. The Lafayette Compre-hensive Plan states that future developments should to endeavor to be more sustainable than suburban development. There are dozens of goals in the comprehensive plan to this effect. Tradi-tional suburban-style zoning, as found in the Lafayette Develop-ment and Zoning Code, does not have a code category developed to permit sustainable, walkable, compact mixed-use neighbor-hoods. The PUD process it the way that the Weems development team is able to build a sustainable neighborhood, that improves upon suburban-style zoning in pursuit of the city’s Comprehensive Plan goals.

Why is the developer asking for commercial zoning as part of their PUD?

The Lafayette Planning Division suggested to the development team that the preferred way to do zoning for a sustainable neigh-borhood is to use T-1 zoning category as a base, on top of which additional zoning language and restrictions would be placed.  The T-1 permits a residential neighborhood with a small amount of neighborhood serving commercial such as corner stores, a coffee shop, a yoga studio, a CSA food hub, or farm-to-table restaurant. The city felt that it was preferred that the developer add restrictions to an existing zoning category, rather than add additional permis-sions to an existing category or write a new zoning code from scratch.  Therefore, the city suggested to the developer to use the T-1 zoning with extensive restrictions as the method to write a zoning code for the Weems property.  This code can become a case study that may inform future improvements to the Lafayette Development and Zoning Code, in support of the Comprehensive Plan’s sustainable development goals.

I’ve heard that this is a high-density neighborhood?

I‘ve heard that there will be low-quality mass construction that is ugly and I’m concerned this may bring our property values down?

So are we =) But it definitely won’t happen at the Weems property. As developers, we could easily have gone the cheap route to maximize profits, laying out cookie cutter houses on a grid over the entire parcel, but as a local Lafayette company we believe in creating a superior product that will enhance our reputation and elevate building standards in Lafayette. Sure, we could have foregone the solar and geothermal systems in every unit, but then we would just be another developer. We build to last, and our construction and materials palette will be of the highest quality.

I am concerned about the increase in traffic?

Are out-of-touch / out-of-town developers simply out to maximize profits at the expense of Lafayette?

Absolutely not. Come and meet us! We are a Lafayette-based company that currently employs more than 45 people. The development will be a huge economic driver for the city of Lafayette and will create more than 200 jobs for the local community. All timber frame packages, wall/floor/roof systems will be fabricated right here in Lafayette by our employees. We plan to place Lafayette at the forefront of sustainable building technology. If you would like to schedule a tour of our facility to see how we build high-precision quality homes, feel free to contact us anytime.

I am concerned about this residential development changing the rural small-town feel of Lafayette?

So are we. Our focus is to create a beautiful, tranquil, modern farmhouse aesthetic that aligns with the current rural atmosphere of Lafayette. As dedicated community members of Lafayette, we feel it is our duty to strike the correct balance between what the city desires and what the city can accommodate. And if we weren’t developing this land, somebody else with far fewer scruples might.

I heard that to maximize profits, multiple lots will be placed right next to each other with no yards or gardens?

The neighborhood will make significant investments toward providing plentiful, diverse, and finely detailed environments for outdoor living. All single-family homes will have sunny south facing yards and gardens. All town homes and row houses will have patios and garden spaces. Multi-family units, which will be located only in a two-acre area to the northeast of the property, will have sunny courtyard gardens and community areas, with high quality landscaping and streetscapes.

I am concerned about Affordable Housing bringing down property values in the area?

No affordable housing is planned. Instead, the development has a rich diversity of housing options for people from varying income brackets, ages and abilities.

Will my view of the mountains be ruined?

I am against mindless development with no consideration for neighbors.

So are we. We have been given the opportunity to develop this beautiful property in a thoughtful and respectful manner, while at the same time providing a rich housing mix for the growing Lafayette community. A community center, CSA farm, fruit and flower gardens, 45% of land dedicated to open space, and connected bike trails do not constitute mindless development…in fact, they constitute the very opposite. We plan to create a community that will act as a meeting point, social hub, and a dignified northern gateway to the City of Lafayette.

If you would like to learn more about what we do or how we do it, feel free to contact us. We would love to meet with you and schedule a tour of our design and construction facility.